Juneteenth marks the most significant event in American history after independence itself—the eradication of American slavery. 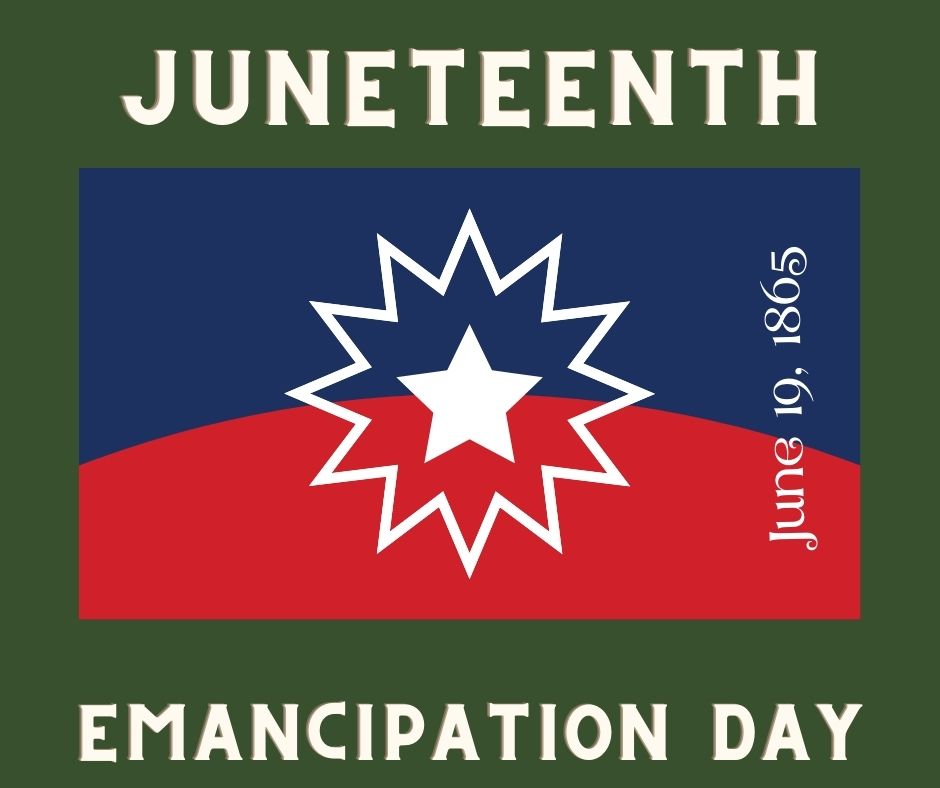 Juneteenth is celebrated on June 19th and is the oldest nationally celebrated commemoration of the ending of slavery in the United States. Juneteenth commemorates African American freedom. This holiday is celebrated in many ways. It is a day, a week, and in some cases a month marked with celebrations. On this special day, many reflect, rejoice, and make plans for the future. Juneteenth is growing in popularity in cities across the country. People of all ethnic groups and religions are joining hands to truthfully acknowledge a period in our history that shaped and influenced our society. For more information see the Juneteenth Fact Sheet.

On Thursday, June 17, 2021, President Joe Biden signed legislation into law establishing June 19 as Juneteenth National Independence Day.  As he signed the bill, President Biden said that this was "one of the greatest honors" of his presidency. 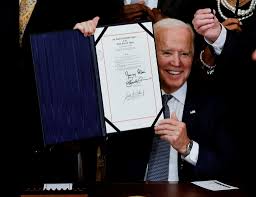 “By making Juneteenth a federal holiday, all Americans can feel the power of this day and learn from our history -- and celebrate progress and grapple with the distance we've come (and) the distance we have to travel," Biden said.

Attending the ceremony were members of the Congressional Black Caucus, local elected officials, community leaders, and activists. Opal Lee, the activist who campaigned to establish Juneteenth as a federal holiday, was also in attendance.

On June 19, 1865, Union soldiers, led by Major General Gordon Granger, landed at Galveston, Texas with news that the war had ended and that slaves were now free. This took place two and a half years after President Lincoln’s Emancipation Proclamation – which had become official January 1, 1863. The Emancipation Proclamation had little impact on the Texans due to the minimal number of Union troops to 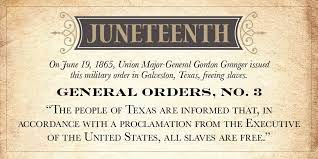 enforce the Proclamation. However, with the surrender of General Lee in April of 1865, and the arrival of General Granger’s regiment, the forces were finally strong enough to influence and overcome the South's resistance.

Some explanations for this two-and-a-half-year delay include the story of a messenger who was murdered on his way to Texas with the news of freedom. Another story is that the news was deliberately withheld by the enslavers to maintain the labor force on the plantations. Still, another explanation is that federal troops actually waited for the slave owners to reap the benefits of one last cotton harvest before going to Texas to enforce the Emancipation Proclamation.

General Granger’s first order of business was to read to the people of Texas, General Order Number 3 which began most significantly with:

"The people of Texas are informed that in accordance with a Proclamation from the Executive of the United States, all slaves are free. This involves an absolute equality of rights and rights of property between former masters and slaves, and the connection heretofore existing between them becomes that between employer and hired laborer."

The reactions to this news ranged from pure shock to immediate jubilation. Moving and settling into new areas as free men and women brought on new realities and the challenges of establishing a heretofore non-existent status for black people in America. Recounting the memories of that great day in June of 1865 and its festivities would serve as motivation as well as a release from the growing pressures encountered in their new territories.

The celebration of June 19th was coined “Juneteenth” and grew with more participation from descendants. Juneteenth continues to be highly revered in Texas decades later, with many former slaves and descendants making an annual pilgrimage back to Galveston on this date. 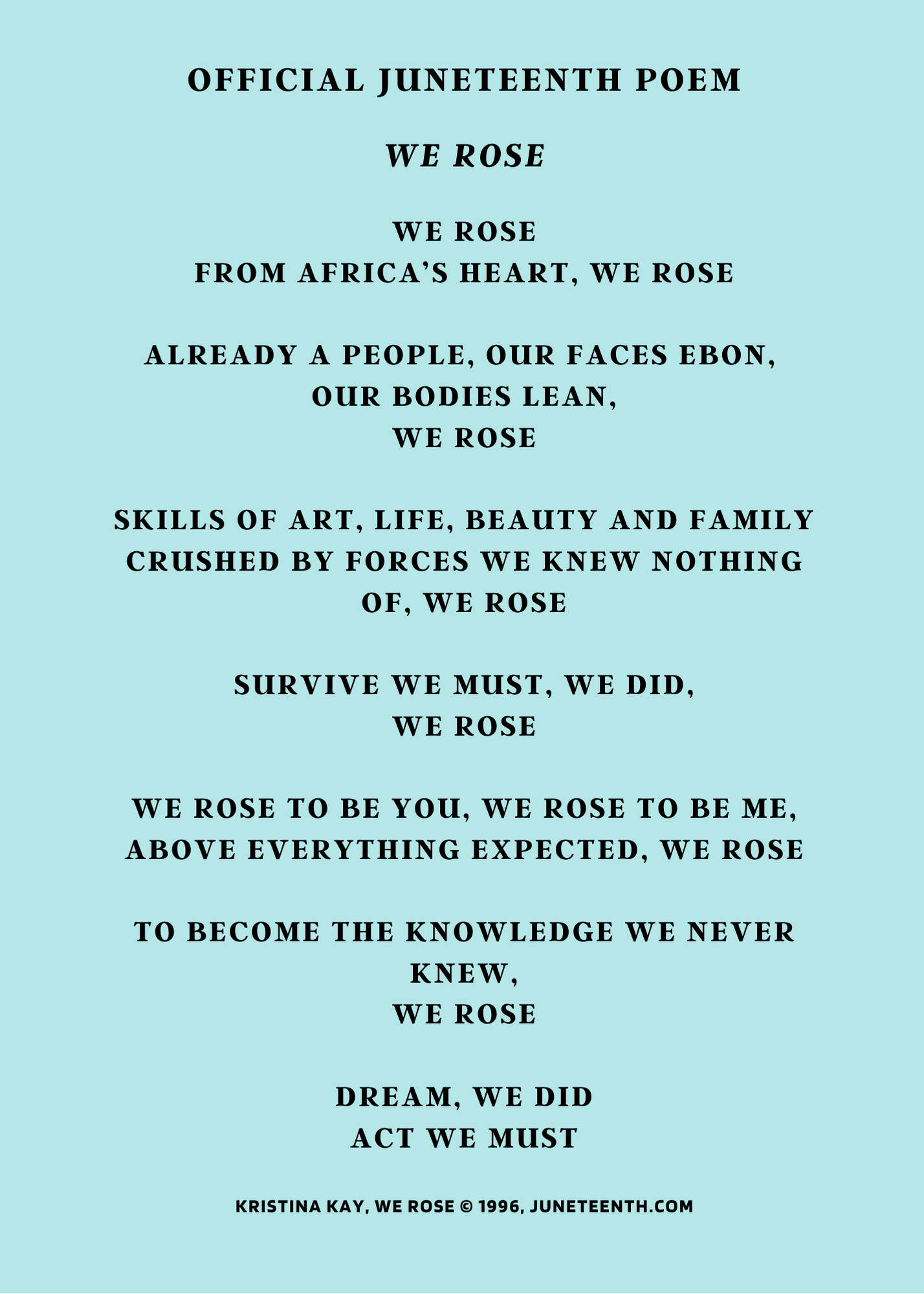 Juneteenth is a joyous holiday, celebrated among friends and family with song, dance, story-telling, food, and prayer. The holiday also commemorates and celebrates timeless truths as well as historic moments. It reflects the universal dreams of freedom and community and celebrates the resilience and steadfastness of the human spirit and the achievements and contributions of African-Americans to this country.

We Rose is one of the official poems which celebrates this day. 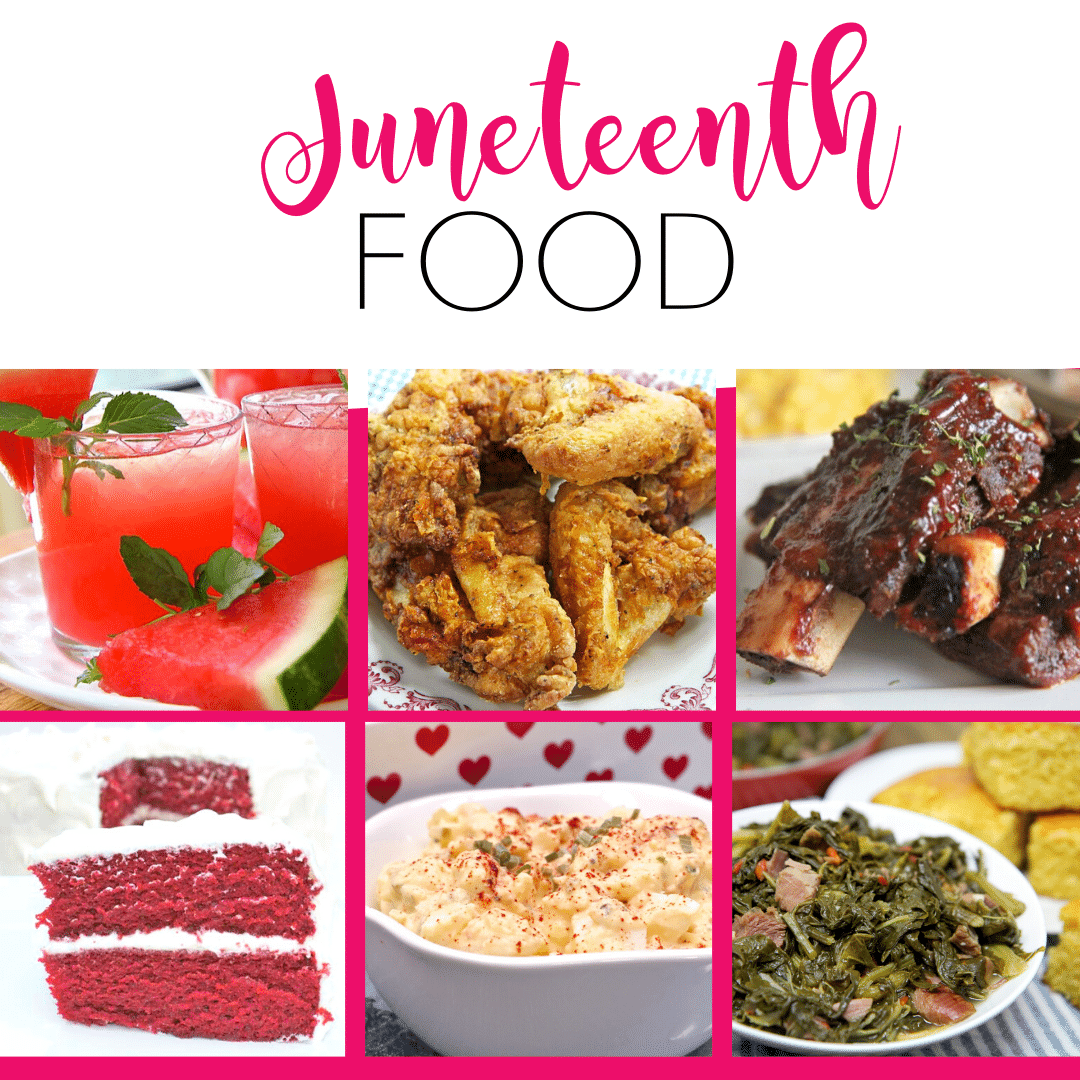 encouraging continuous self-development and respect for all cultures. Celebration activities include rodeos, fishing, baseball, and barbecues. Prayer services are often a major part of this celebration. Certain foods, like strawberry soda, became popular and subsequently synonymous with Juneteenth celebrations. The barbecue pit is often established as the center of attention at Juneteenth celebrations. Meats such as lamb, pork, and beef which were not available every day were brought on this special occasion.

Red foods are customary for Juneteenth, the crimson a symbol of ingenuity and resilience in bondage. Watermelon, Texas Pete hot sauce, and red velvet cake, and strawberry pie are abundant. Spicy hot links on the grill — most commonly made with coarsely ground beef, and artificially dyed red — are a Juneteenth staple.