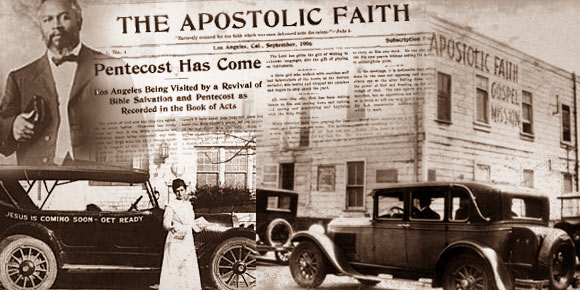 The first "Pentecostals" in the modern sense appeared on the scene in 1901 but it was not until 1906, however, that Pentecostalism achieved worldwide attention through the Azusa Street revival in Los Angeles led by the African-American preacher William Joseph Seymour. In 1906, Seymour opened the historic meeting in April, 1906 in a former African Methodist Episcopal (AME) church building at 312 Azusa Street in downtown Los Angeles.

For over three years, the Azusa Street "Apostolic Faith Mission" conducted three services a day, seven days a week, where thousands of seekers received the tongues baptism. Word of the revival was spread abroad through The Apostolic Faith, a paper that Seymour sent free of charge to some 50,000 subscribers. From Azusa Street Pentecostalism spread rapidly around the world and began its advance toward becoming a major force in Christendom. 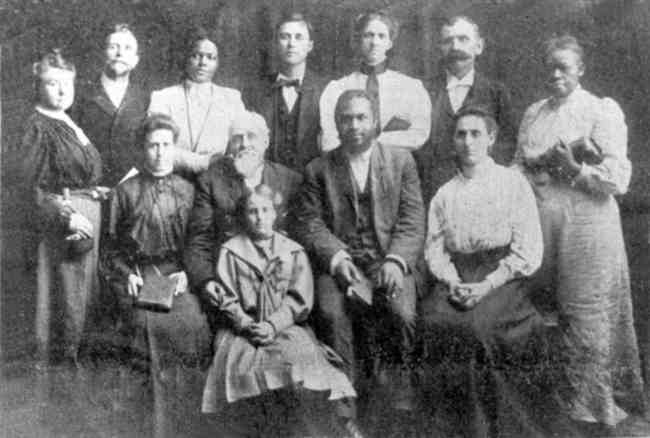 The interracial aspects of the movement in Los Angeles were a striking exception to the racism and segregation of the times. The phenomenon of blacks and whites worshipping together under a black pastor seemed incredible to many observers. The ethos of the meeting was captured by Frank Bartleman, a white Azusa participant, when he said of Azusa Street, "The color line was washed away in the blood." Indeed, people from all the ethnic minorities of Los Angeles, a city which Bartleman called "the American Jerusalem," were represented at Azusa Street.

Oral Roberts was a pioneer within the Christian community for hisviews on racial inclusion in American Society. In the 1950's, Roberts took a bold stand and refused to segregate his tent crusades, even in the Jim Crow South. This stance was unpopular even among many of his supporters in the Pentecostal community. But Roberts declared, "I will not segregate the altar of God."

in the 1960's, Roberts started ORU during the height of the Civil Rights Movement. Roberts and often took public stances against segregation and racism. Here is an open letter Roberts published in his magazine, The Abundant Life, in March of 1968. 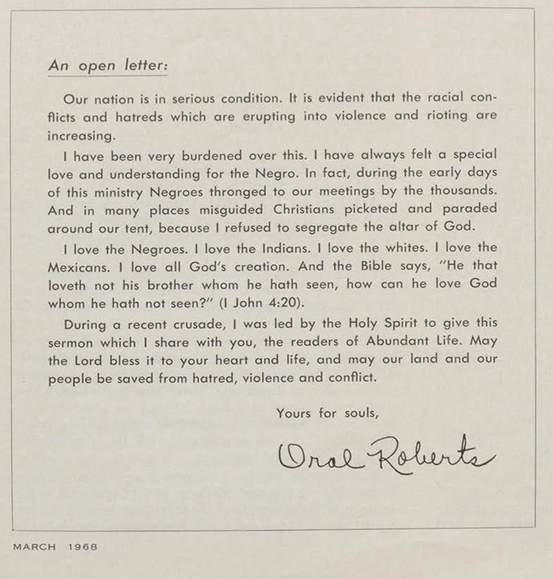 in 1968, Roberts was invited by black pastors from Harlem to discuss how his crusades could help bring hope and healing to the black community. You can see the photo of his meeting with these pastors below. You can listen to Roberts talk about this meeting here. Oral Roberts' racial vision continues today at ORU, which has continued to be a place of racial diversity and inclusion.