How to Find Books and Ebooks 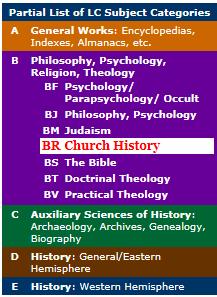 Books about similar subjects will have a similar call number, so once you locate a book on the shelf, look at the books to the right and left.

The first letter of the call number represents a major category or subject. For example, a call number that begins with "B" represents the subjects of "Philosophy, Psychology, Religion, and Theology."

The second letter of a call number represents the specific sub-section within the general subject area. As shown in the shortened outline to the right, materials with call numbers beginning with "BR" are on the subject of "Church History," a subdivision under "B--Philosophy, Psychology, Religion."

Go to the complete opens new window Library of Congress Classification Outline and drill down through the subjects to identify call numbers sections in your area of interest.

opens new window Library of Congress Names
- View alternative, broader, and narrower terms. Key in a term, select a heading, then click Search. Choose a "Label" then click the "Visualization" tab.
- For subject headings, key in your search term, select LC Subject Headings, and then click.